I've long been a fan of Guy Steele. I was first introduced to him because he was the author of Common Lisp, The Language. But then I found that he also co-invented Scheme. This blew my Lisp-2 mind. How could he work on Lisp-2 and Lisp-1? Then I found out he wrote the Java spec and was totally baffled. Java? He was supposed to be a Lisper! But it gets worse. He was working on Fortran!

The whole experience of learning about Guy Steele shook me deeply. I realized I was being silly. I believed there was One True Language that all languages aspired and competed to be. But this is not true. And Guy Steele embodies the view that you can be fair-minded, that features can be borrowed, that all languages have warts, and that we're still learning how best to design languages.

Guy Steele is an amazing figure. He was instrumental in writing the specs for C, Common Lisp, Scheme, and Java.

He's also a great speaker. His talks are always concise and to the point. He seems like such a nice guy. He never says anything harsh!

This is only a selection of his works. You can find a much more complete list here. See also his Wikipedia entry. 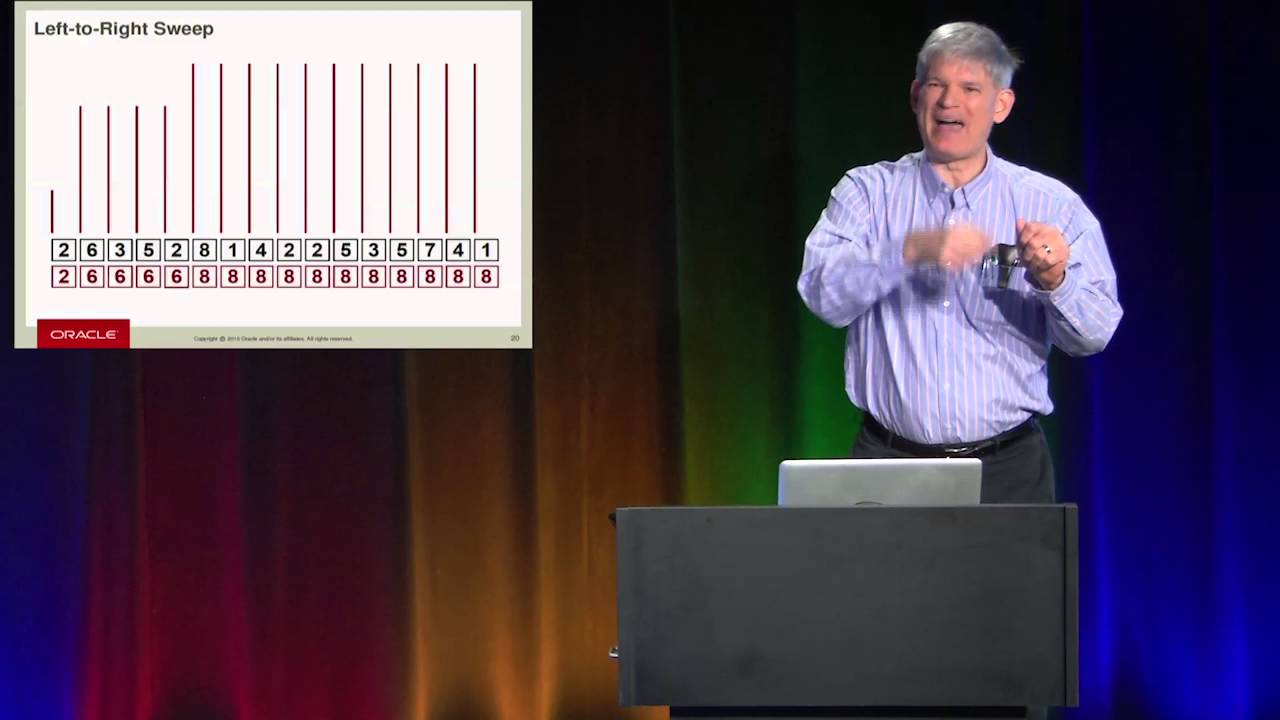 Four Solutions to a Trivial Problem

Guy Steele presents four different solutions to a single problem. The first solution is a purely sequential solution programmed with a for loop. He then shows how a "build-and-conquer" approach is much better for automated concurrency. His argument is that we will soon have to change the patterns we use for solving problems because they are inherently sequential. As things need to become more parallel, we will need the language to automatically find opportunities (either at compile-time or runtime) to run things in parallel. 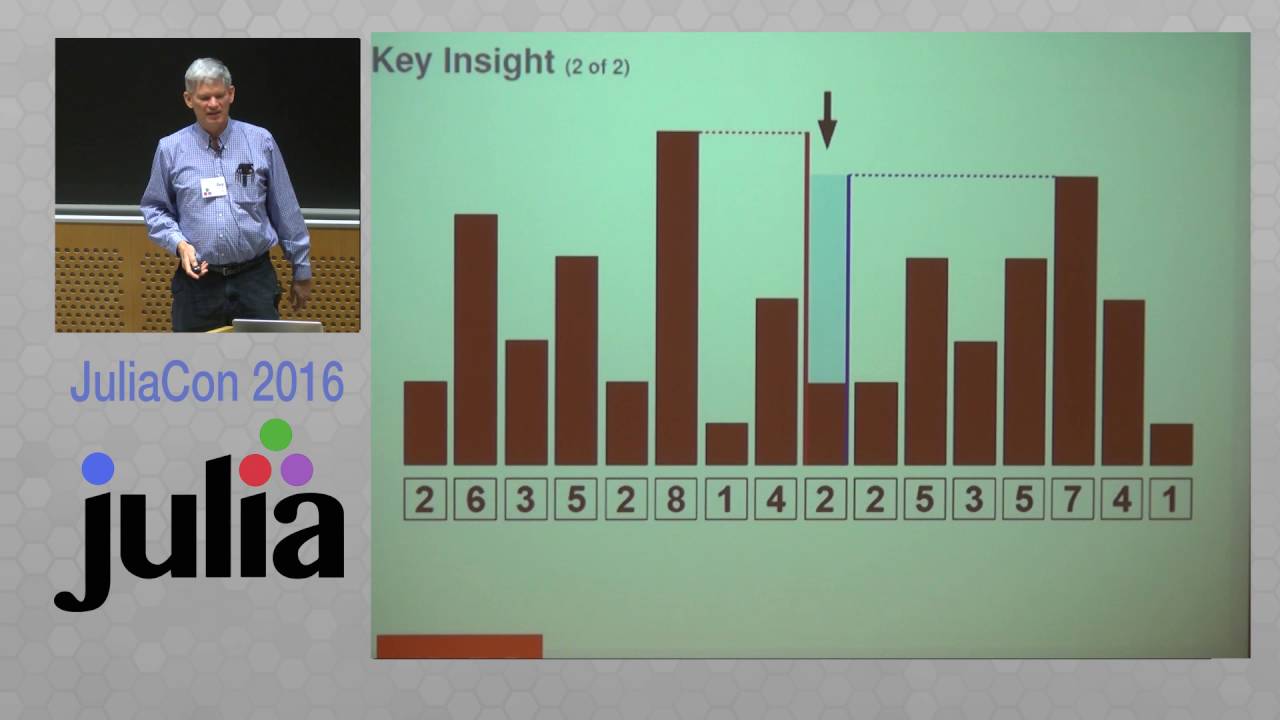 Guy Steele led a team of programming language researchers to develop a language called "Fortress". It was an amalgam of 20 far-out ideas, including mathy unicode syntax, extreme extensibility, and automated parallelism. The project was eventually defunded. But he shares some of the things they learned with the Julia community.

What a great presentation. I don't want to spoil anything about this. But you will come away with a new understanding of how verbose our current style of programming is and why it is that we have to define everything ourselves. Further, he presents a veritable manifesto of extensibility of languages with a potential solution to the Worse-Is-Better paradox.

A transcript is available.

He presents a few cool ideas from Daniel Friedman, including lazy sequences and programmed instruction.

Guy Steele and Richard Gabriel's jam that touches on 50 remarks on the history of programming in 50 words each. This is definitely worth watching. It's a little artistic (as Richard Gabriel tends to roll), but it leads to a deeper appreciate of the ideas.

Forget about Monads. We absolutely need to start thinking about Monoids. And not just any monoids. They need to split a problem evenly, not first-and-rest as we typically do with sequences in most functional languages. This talk directly inspired Clojure's reducers library.

How to Think about Parallel Programming: Not!

In this talk, Guy Steele argues that like automatic memory management, parallelism is best left up to the compiler. However, this requires us to give up some of the constructs we have today and code in a new style based on "build-and-conquer" algorithms. Right now, our functional algorithms are based on linked lists, which are inherently sequential--they decompose into a first and a rest. We will need to build equivalent data structures that decompose into two equal parts.

Panel: The Future of Programming Languages

Back in 2008, a small sub-conference hosted at OOPSLA celebrated the 50th anniversary of Lisp. One of the highlights was Rich Hickey speaking. Another was this interview between Guy Steele and John McCarthy. Unfortunately, it was supposed to be Alan Kay interviewing McCarthy. But McCarthy was too sick to travel, so Alan Kay canceled. Still, Guy Steele is a great interviewer. 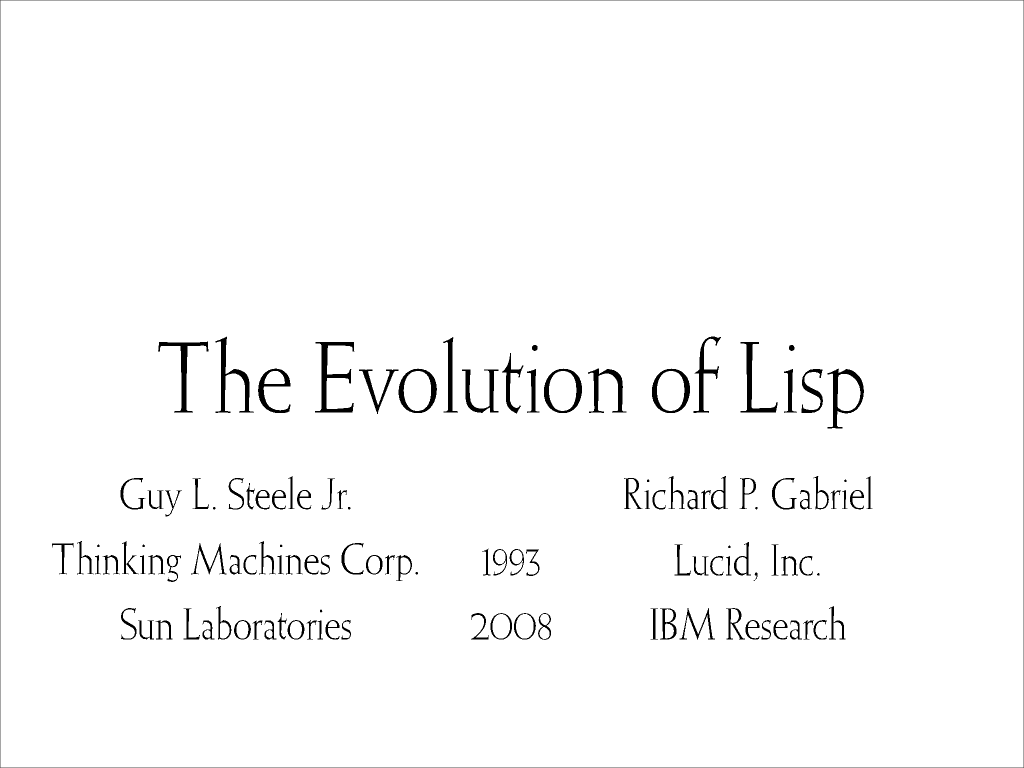 The Evolution of Lisp

An awkward re-enactment of a talk the speakers gave 25 years before. It's an interesting talk, but a re-enactment? It's a little stilted. However, if you're looking for a history of Lisp as it was in 1993, it's got great information.

There was a paper writter by the presenters on the same topic.

The massive description of Common Lisp was written by Guy Steele. Yes, the language is a monster. But boy is this book clear!

Guy Steele was hired by Sun to write the Java specification. Why? They heard he was good after having written the Common Lisp book, the Scheme specification, and a C spec. Shortly thereafter, people felt he had betrayed his Lisp roots by going to Java. He was quoted as saying "We were not out to win over the Lisp programmers; we were after the C++ programmers. We managed to drag a lot of them about halfway to Lisp."

This reference predated the ANSI standardization of C.

Rabbit: A compiler for Scheme

This is the original paper, from 1975, presenting the Scheme language. The paper is a must-read. It discusses Scheme, language design choices, an exploration of different possible semantics, and includes a complete implementation of an interpreter in another Lisp.

or, LAMBDA: The Ultimate GOTO

This paper is so important in the history of compiler design. Before this paper, it was commonly thought that function calls were very expensive and should be minimized. Steele showed that they could be, in many important cases, be compiled into a single GOTO. This makes function calls strictly better than GOTO and cheap enough to do all the time. Thank this paper next time you write a one-line function.

Wow! A super-important paper in the history of Lisp and programming language implementation in general. Many compiler techniques that are in use in languages like JavaScript were first presented here. This paper follows and attempts to correct the previous paper LAMBDA: The Ultimate GOTO. The correction was that it isn't Lambdas that are GOTOs, but function invocation.

This paper brings a different perspective to functions. It shows that they can be seen as a naming operation within an environment. The paper takes this expression to logical conclusions, which lead to new compiler techniques.

The Art of the Interpreter

or, The Modularity Complex

This paper shows how an interpreter can be used to quickly prototype new language features. They go through a small portion of the history of the features of Lisp.

This paper briefly describes an implementation of Common Lisp in another Lisp. It discusses the advantages, which are basically that it's easier to read and write than an assembly version, and the disadvantages are that it is slower. These seem obvious now. But notice the term Lisp-in-Lisp. I believe this is the origin of the term Clojure-in-Clojure, which was an important goal on the way to a self-hosting ClojureScript compiler.